Since the begging of the year there hasn’t been a day when I didn’t log into Elite Dangerous.On paper the game doesn’t seem all that compelling. Most of it is spent waiting. Waiting to jump to a new system, waiting to get close enough to a station to dock, waiting for collector drones to collect things, but here I am still logging in. I’ve put in 65 hours and I’m still learning a lot and trying new activities.

Usually my time is spent running missions for the Euboa Life Solutions Corporation in my adopted home station, Lee City. I’ve been trying to increase my reputation with them so that’d they’d give me better paying missions. But lately they’ve been stingy on the missions lately.  Most of them are requests to kill corporate competitors but I’m not that interested in combat right now. I can kill things in a lot of games, there aren’t a whole lot of games where I can play solely as a trader, explorer, miner, scavenger, or passenger transporter and be rewarded for it.

So I took off in search of something else to do late last week. I saw that there was a community goal of delivering consumer technology and domestic appliances to a nearby system where a station was trying to build a family restaurant. I’d wanted to get into bulk trading commodities between systems and this was the perfect excuse to start.

Seeing as my current ship could only carry 32 tons of cargo I needed to upgrade to something a little bigger. Thankfully I had about 6 million credits built up from my time doing missions. I was able to buy and outfit a Type-6 Transporter (pictured above) that carries 100 tons of cargo. It’s not pretty and not as agile as my last ship but it sure is an upgrade. 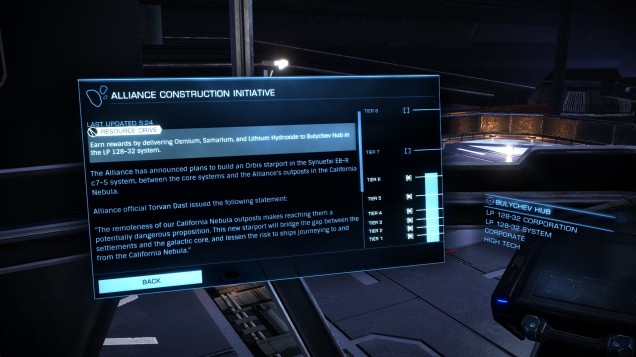 Community goals are something I’ve been watching from afar for the past couple weeks.  Each CG run for a week or until they are completed. There are 8 tiers to the goals and as players turn in items to the station the tiers increase and so do the rewards when the event ends. Participating in the goal earns you a base reward of credits and depending on your level of contribution more credits are awarded.

The goals end on Thursdays and I started last weeks on a Wednesday. I managed to get into the Top 75% contributor bracket and ended up with about 4 million credits when the goal was over. This was on top of the 2 million I had made from selling the consumer tech and domestic appliances to the station. I made my money back from the new ship with a little extra for profit. Not bad for only 2 hours of hauling cargo.

This week the community goal centers around mining Osmium, Samarium, and Lithium Hydroxide. Judging by a few Reddit posts there hasn’t been a mining CG in quite a while.

I like how each goal has a little story behind why these materials are needed. Here’s this weeks:

The Alliance has announced plans to build an Orbis starport in the Synuefai EB-R c7-5 system, between the core systems and the Alliance’s outposts in the California Nebula.

“The remoteness of our California Nebula outposts makes reaching them a potentially dangerous proposition. This new starport will bridge the gap between the settlements and the galactic core, and lessen the risk to ships journeying to and from the California Nebula.”

The initiative is being overseen by the LP 128-32 Corporation, which has placed an open order for various raw materials for use in the construction. The organisation has also placed a kill order on all ships on it’s wanted list, to ensure that those contributing material to the campaign can do so safely.

I didn’t feel like going back to Lee City and the new goal was only a few jumps from the location of the last one. Lucky for me the T-6 can be outfitted for mining with just a few swapped modules and very little credit investment.

Mining is another activity in Elite that just sounds mindnumbingly boring. You fly into an asteroid field and start firing prospecting limpets into asteroids. When the limpet lands it will tell you the ore composition of the asteroid. If it has the ore your after you fire your mining lasers at it until its depleted while collector limpets scoop up the fragments of asteroid the lasers are shaving off. Once the asteroids depleted you rinse, lather, and repeat until you either have a full cargo hold or run out of limpets.

That’s how I spent my gaming time this weekend. Flying around resource sites looking for asteroids with a good amount of Osmium and Samarium. Sometimes I would find a whole cluster of asteroids and sometimes I would waste 10 prospector limpets looking for something worthwhile to mine. I died twice while I was out mining. Once to an NPC pirate who wanted my hard earned cargo that I unsuccessfully tried to out run. And again when I got a little too close to the rotating edge a very large asteroid that totaled my ship in three seconds flat.

So far I’ve delivered 108 tons of goods to Bulychev Hub, enough to put me in the Top 50% bracket for now. The goal is on tier 6 and the payout so far will be 7.5 million if I maintain my current bracket.  I’m not sure if I’ll put anymore time into it this week. I did enjoy my time mining but the T-6 isn’t very efficient with it’s small mining lasers. On average it took about an hour to fill up enough to justify going back to the station.