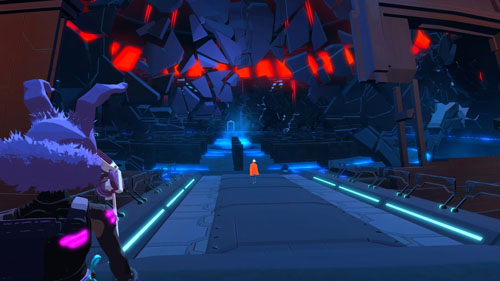 I spent all of this week trying to down the second boss in Furi, one of July’s PS Plus freebies. I don’t normally play games in the “so hard it’s fun” genre. I like some challenge in my games but I’m not a fan of the all challenge all the time style. But after playing Dark Souls 2  last weekend, I was in the mood to test my difficulty limits.

The story began with a pretty cut-scene. I escaped from my cell,and picked a fight with my captor, the Warden. The fight, which was basically the tutorial, went well. I lost some lives but overall I beat him on my first try.  Brimming with confidence, I started the long walk down to the next level and the new boss all while a man with a rabbit head filled me in on her. Upon arrival I was thoroughly trounced again and again by the Hunter.

In this twin stick shooter/hack and slash game, each boss has 6 phases and each phase you are given full health and 3 lives. If you lose a life during a phase the phase starts over and the boss gets their health back. Lose all three lives and the whole thing starts from phase one again. Starting over and over had me yelling at my TV more than I’d care to admit. Everything you just did for the past 20 minutes didn’t count.

That’s what I thought at first. But as I came back to challenge the boss once or twice a day  I noticed I was getting better. Taking the approach of playing it a little each day instead of trying to power through it for hours definitely helped make it least frustrating.  I was dying less during the early phases, I started having more health on my last life on the later phases, my parries were getting better and I knew the attack animations and how to avoid them. I was getting better as a player. What surprised me was that even though I wasn’t going anywhere in the game, I felt like I was progressing.Finally on Friday I kicked the second boss into a pit with a cry of victory  and was on my way to the third. Maybe this one won’t take so long to beat.